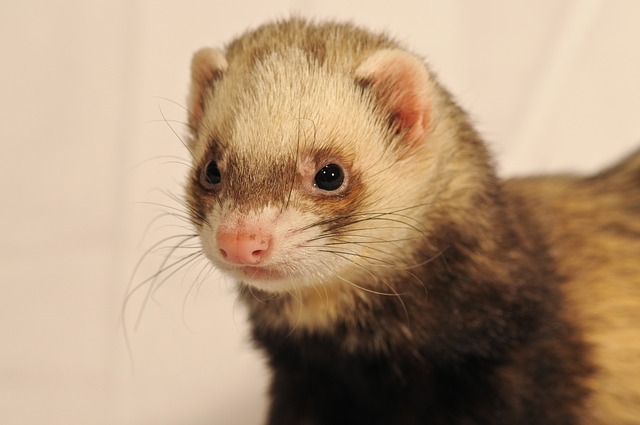 Ferrets can make great pets for the right owner. They are playful, affectionate and curious. In the past they have been used for hunting and pest control, and still are in some cases, but they are becoming more and more popular as pets.

Ferrets can make great pets for the right owner. They are playful, affectionate and curious. In the past they have been used for hunting and pest control, and still are in some cases, but they are becoming more and more popular as pets.

Ferrets should be socialised and handled from a young age. Young ferrets (kits) can be prone to biting, so if you’re considering getting a ferret for the first time you might like to consider looking for a ferret that is a bit older and has been well handled. They don’t have the best eyesight and if startled when asleep they may bite by mistake. They can be quite wriggly to hold, so care should be taken to ensure they aren’t dropped. With this in mind, ferrets may not be the most ideal pet for young children.They need to be constantly supervised when outside of their cage, as they are very inquisitive and like to explore. You’ll need to keep an eye on them to ensure they don’t get hold of anything hazardous or toxic.

Ferrets are strict carnivores, therefore require a meat-based diet. As they have quite a high metabolic rate, they eat small amounts of food frequently rather than big meals once or twice a day like with other pets. Commercial ferret diets are available – they shouldn’t be fed cat or dog food. Whole raw eggs can be given as a treat.

Ferrets are very intelligent creatures and can become quite adept at problem solving, so it’s important to provide them with plenty of mental stimulation in the form of puzzles and toys. They need plenty of exercise outside of their cages on a daily basis. They can be trained to walk on a lead with a harness.

They are most active at dawn and dusk, and can sleep for up to 18 hours a day. Ferrets can be kept on their own (if they have plenty of human interaction and attention) or in small groups – ideally of the same sex, or neutered males and females.

Ferret housing must be secure and sturdy to prevent these small inquisitive creatures from escaping, and should be as large as possible. Ideally for a pair of ferrets, an enclosure of 3m x 2m x 2m to allow them to have plenty of room to exercise and play. Ferrets like to bury food, which can go mouldy, so it’s important to clean their cage regularly.

Ferrets will require an annual health check at the vets. It’s recommended to vaccinate them against distemper – as if contracted it can be fatal. Ferrets, like cats and dogs, can also be microchipped which is helpful to identify them if they were to go missing. Jills come into season in the springtime, and this lasts until they are mated. If a jill is not mated and is allowed to stay in season, she can become unwell and develop anaemia, which in some cases can be fatal. Male and female ferrets can be neutered, but there are slightly increased risks of adrenal gland problems in neutered ferrets so it’s best to speak to your vet regarding whether neutering is appropriate for your ferret. Alternative options for female ferrets include a hormone implant every 18 months or an injection every few months. Like cats and dogs, ferrets can be prone to parasites, including fleas and ticks – your vet can advise you on appropriate safe and effective preventative treatments.